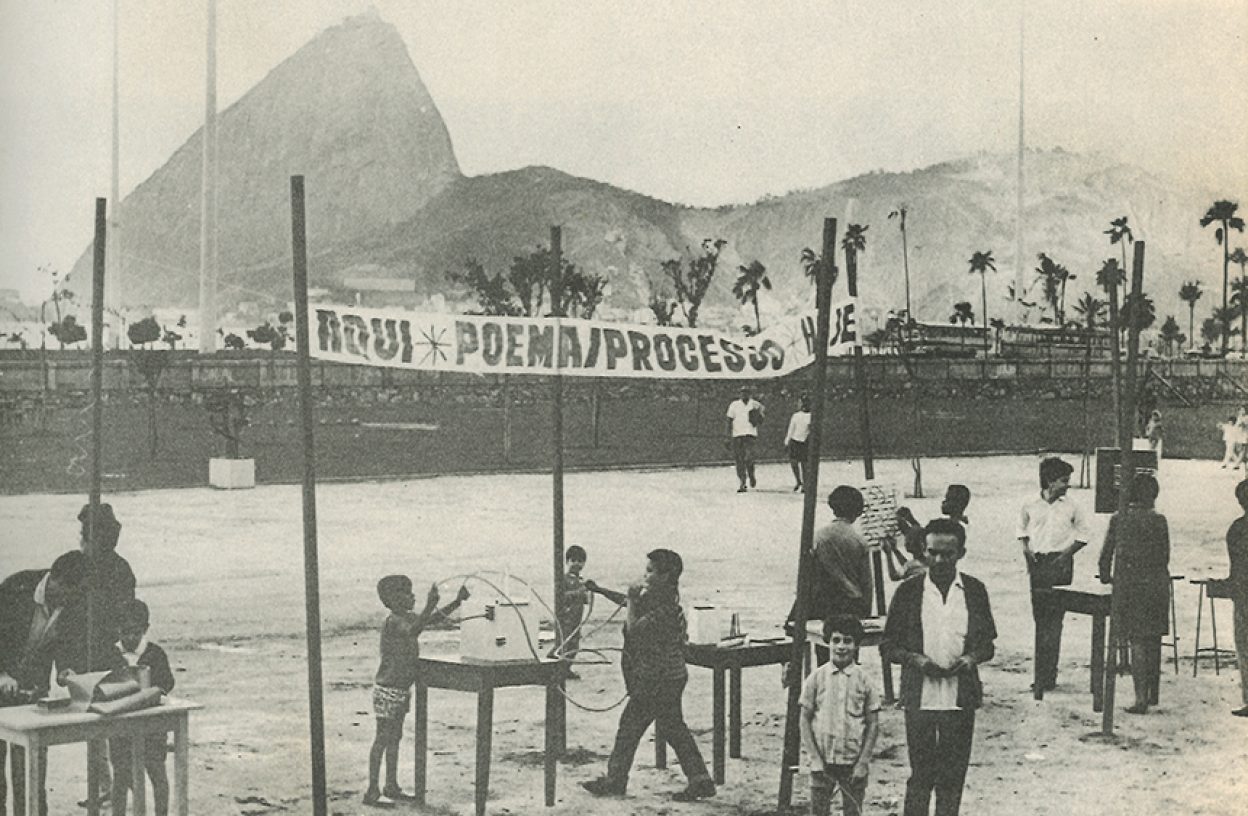 Stemming from Concretism and within the political context of the Brazilian military dictatorship, the Poema/Processo [Poem/Process] movement appears as a creative rupture with institutionalized communication in the field of literature, poetry and visual arts. Founded by the precursory figures of Wlademir Dias-Pino, Álvaro de Sá, Neide de Sá, Moacy Cirne, Falves Silva, among others, the movement’s first exhibition opened simultaneously in Rio de Janeiro (at the Superior School of Industrial Design) and Natal (at Sobradinho museum) in December 1967. Its first manifesto, published in April 1968 during the 4th National Poema/Processo Exhibition in the Museum of Modern Art of Bahia, set forth the ideas which oriented the group’s practice and theory, creating a reproducible artistic goal which fulfilled the masses’ needs for information and communication, guided by the logic of immediate consumption.

Graphic poems, object poems, interactive poems, “envelopoems” and “performancepoems” are some of the contributions that Poema/Processo gives us. As part of their propositions, they also created the concept of versions, which pointed to the rupture with style: each artist could make a version of another artist’s work and vice-versa, creating a mechanism of continuity of the work, of transformation as process, of counterstyle and co-authorship. Immersed in a field of great possibility and inventiveness, one of the practice’s most relevant contributions is the breaching of genres, in which word turns into image, image turns into sculpture, and three-dimensionality becomes an action. The poem, free from its traditional support, becomes multidisciplinary, and is able to present us with the notion that any conjuncture of creation and of reality takes place within a process, like life itself.

The book, containing 320 pages, presents a historical overview of visual poetry in Brazil, documenting the main performances and works produced by the Poema / Process group between the years 1967 to 1986. Organized by Gustavo Nóbrega, the book has written historical texts by Frederico Morais, Moacy Cirne, Álvaro de Sá, Neide Sá, Frederico Marcos, Anchieta Fernandes and, most recently, the text by curator and researcher Antonio Sergio Bessa. The organization follows a chronological order and proposes that the story be told by the artists and critics of the time, through facts and texts published in books, magazines, catalogs and newspapers.